…how age is catching up with Khloe Nayar.

…with her ears and little head and her slender body a rich chocolate-y brown amid all that black and white, that I once did nibble at her thinking she’d taste like a Black Forest gâteau!

She was a princess, so regal in her ways. She was the lady her sister (that would be me) never could even dream to be! She had the charisma and grace of someone who was born into royalty and had it in her to be so. No one would look at her — in the way she walked, gazed at you or turned a blind eye to Calvin (who was head over heels in love with her) — and be able to make out she ever went through any kind of horrors in life.

Well, she took after her Godmother, the Queen and WIFE. She had to be a Princess!

She was only six then 🙂

…looking like she may have meddled with the bag of flour, sprinkling some healthy amount of it all over her. Well, her expression does say something of the sort may have happened! 😛 Fading away are the rich colours and hues of her once chocolate-y fur. And abundantly settling in are the grace and beauty of a life (being currently) well lived.

She is 10 now! 😐
Trust me, most times, we’re still trying to figure out what species she belongs to 🙄

There’s none of her Princess-ness anymore, so completely clowny in her ways. She’s every bit the tomboy that her sister (that would be me, again) loves being herself. She hops like a rabbit, gallops like a pony, runs like a deer and at times skitters like a lamb — when she is given one of her favourite treats. She flies like a sparrow, a short and quick flight that delivers her all the way from the couch in one end of the living room right in the kitchen that’s a good 10 steps away — when she knows her dinner is being taken off the fire. She jumps all over us, she whines like a lost child and she paws us furiously, not knowing her nails are digging into us — whenever we enter the house, leave without her, and eat our food without seeming to realise she’s waiting by our side for her share. Once in a while, she goes bonkers and flitters around the room like a butterfly, howl-barking at Pumbaa Nayar, and then absolutely freezing in weird poses with some bit of him in her mouth, jaw wide open, as if to say ‘this is your cue to run, boy!‘.

But most funniest of all is when she follows one of us into the kitchen, slowly but surely, like a tortoise — when she knows we’re in there, letting us us know we’re being watched, in case we think we can grab a bite without her knowing. 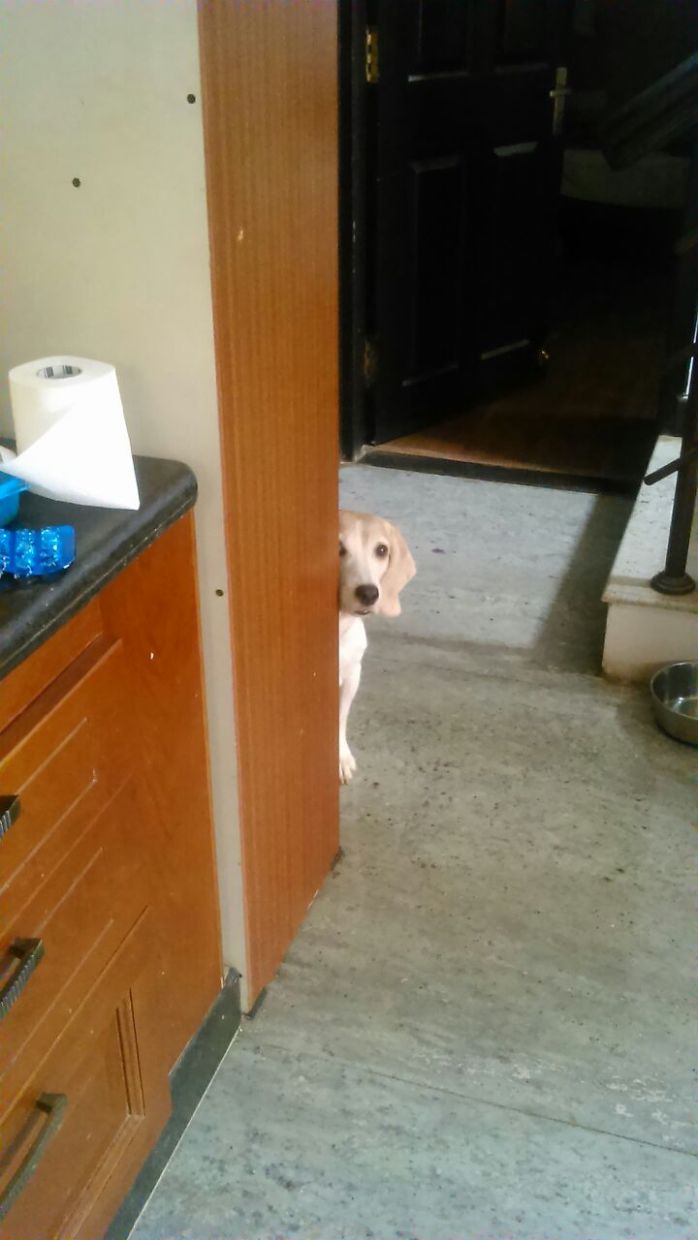 This is she in her elements…