ONE→ — she was a goddess! She had the heart of a…well…I can’t find a single person / thing to compare her with. Love seemed to be the very reason behind her existence…and love is all she ever had in her. From my earliest memories, I can only take out snaps of her angelic face…with that never-fading smile. I could never determine if they were wrinkles or laugh-lines that blanketed her face.

She was always concerned about every living thing’s welfare. Meet her for the first time in your life…and you’d still be asked the one question which was so characteristic of her: “Have you had any food, my dear?” There was not a single person who hasn’t felt warm being asked that. There were only good things she had to tell about people.

She was everyone’s darling — a hot favourite in that neighbourhood. The perfect woman: which put heavy demands on her daughter 😉 .

When she died at the age of 94, even the plants in the house seemed to wilt!

Two→ — born the eldest in the family and followed by two brothers, she was a pampered sister; a disciplined daughter; a liberated wife.

Her childhood — in the role of a daughter — was a supressed one. She longed to wear glass bangles; but when she finally got  a few and wore it, her dad smashed them all into bits. She longed to dress up, but  feared her dad’s reaction to it. She longed to be liberated: and that’s when she got married.

The husband danced to her every whim; gave her all she wanted; treated her like his goddess. But alas! She never became that loving wife he thought (and expected) she would. Money became the reason and the ‘everything’ of her existence. Even when her seven kids grew up, she treated them all on the basis of who was richer…and who gave her the best benefits.

Throughout her life, all that ever mattered to her was money…and her own well-being. Anyone / anybody who came in the way was treated like dirt.

She is now 90. Health is deteriorating; beauty has faded; all that remains is the arrogance, self-indulgence and love for money!

Three→ — probably was born as an angel and sent down to earth for the welfare of a few select earthlings!

The one person in the family who lived for the family. Right from childhood, she took it up on herself ‘to care’. Everyone was always treated like kings and queens by her. Even when they (almost always) forgot to care for her welfare, she’s never had a complaint.

She is beautiful, angelic. And has a heart that matches her face. Love seems to be the very reason behind her existence…and love is all she ever has in her. From my earliest memories, I have felt only the love that overflowed from her heart.

No matter how people treat her, she is always available and ready when they are in need. Nothing ever deters her from helping someone — even while she’s in the worst conditions.

She is everyone’s darling…and will always remain so. She’s the kind of woman every woman would love to be: which places a lot of demands on the daughter 😉 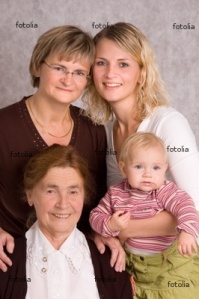 From the cycle of life depicted here, Four→ is likely to follow Two→. But she’d be damned if that happens. Knowing her, am sure she won’t let anything lead to that!! She loves Three→ and that’s who she’d love and strive to be like.

This is the story of four consecutive generations in a family…

Oh! By the way… Four→ is me.
It’s too early to really write anything about 😀 😆