…on November 2nd, I expected a little Labrador pup to jump out of a gift basket (like the ones you see in movies and ads) and come trotting up to me. Didn’t happen! 😦

Anyway, my aunt had come down to Bangalore all the way from Ahmedabad just to celebrate my birthday. Till 2005 (that’s when I left Trivandrum), she used to be home for every birthday of mine. So, since the custom had broken off for 5 whole years, she decided to make it for this one 🙂 The presents came with her too 😉 Two lovely kurtis 😉 😉 Well, she’s always had THE best eye for clothes!

The husband was surprisingly “very sleepy” by 10.30p.m. (while on other days, I have to threaten him with divorce to come to bed at least before 11.30p.m.!!!)]  and dragged me off to bed. And suddenly, had some serious discussions to make…and kept me awake till 12 😀 And again, suddenly, he was hungry, and wanted to have a glass of water 😛 That’s when I asked “What cake is it? Chocolate?” 😀 And with a sheepish smile, he takes me downstairs. Am greeted by Amma, who (almost) blindfolds me and refuses to allow me to the main room. And then, hands clasped over my eyes, am led to the table. All I expect is a cake and candles…when there’s a blast and I open my eyes and the rooms decorated soooo well, like it’s the first birthday of a toddler 🙂 Balloon and colour papers and glitters and  what not. Whooopieeee!

And after the cake is cut and stuffed into all hungry mouths, my brother winks at me and points to the holder beneath th tabletop: the GIFT! A big box wrapped in a lovely paper! I open it…and am speechless! It’s this: 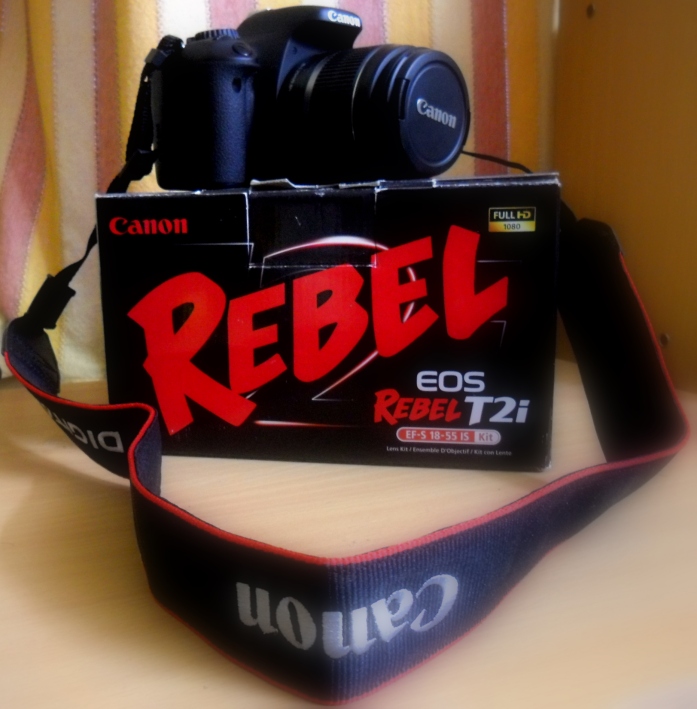 I look at my brother, say “Thank you…!” and look at everyone, thanking everyone for it. I am clueless as to whose gift it is. It being a Canon, I assume it’s from the brother. Until my aunt says, “Thank your patiji…it’s his gift 😉 come all the way from U.S.” Speechless again…and sheepish too…for having thanked the brother instead!

I give him a flushed look and say “Thanks a ton, darling…”, to which he replies, “The camera’s here ; the model will come soon too ;)”

A day and half later, came this new, tiny fur ball 🙂 Though he didn’t really jump out of a gift basket (like the ones you see in movies and ads) and come trotting up to me.

Our Pumbaa…The successor of Ricky, our first ever fur ball 🙂

Had had a 3-day long weekend…and was oh-so-not interested in going to office on the 4th day which was also the birthday :D. Well, Amma’s chicken pox came as a blessing in disguise. [Oh, for those who didn’t know, my brother came back from UK after a year long stay — and bought us “imported chicken pox virus” 😀 😀 He came with rashes all over his body…and we thought it was some kind of food poisoning or allergy — and that too, we all saw it only after the ‘warm welcome’ ceremony was over: hugs n kisses n more hugs.] Took the day off to take care of Amma. Let her rest, took over the cooking. Made prawns biriyani, beef curry, salads, and with other accompaniments like pappads and pickle, had a yummyyyyyy lunch!

Feels blessed…for lovely parents, an awesome brother and well, for having a husband who doesn’t just SAY “anything for you darling”, but DOES something about it too 😀 *hunts for a dark corner to hide in, for she never gets him anything on his birthday 😦 😦*

P.S.: On November 3rd, I borrowed the chicken pox from Mom, and was out of commission for quite a while 😀 I knew this would happen, ‘coz she’s the one who blew up all the balloons, which were burst over my head. I told her she shouldn’t have blown all the virus into the balloons 😀 😀 😀 Love you, Amma. Thanks to you, I’ve been home all this month; no office 😉 😀 😀