After months of waiting, today I saw Richard Parker. And Oh My God, is he breathtaking! 🙂

It has been over 4 years since I wrote this. Life of Pi is the best book I’ve read. No other book had me completely flabbergasted, left me wondering if it was fact or fiction. I vividly remember Googling certain things described in the book, to find out if those were for real.

Of all the things in the book, I was most impressed by Richard Parker. Totally taken, completely smitten. Head over heels in love 😀 I was 24 then. Grown up enough to not be taken over by a Bengal tiger, and an imaginary one at that 😀 Well, four years later, Richard Parker stormed into my life with the same enchantment and had me gaping with such glee. What a beauty he is! I thought at least the movie would make me give more importance to Pi 😀 Sorry Pi, Richard Parker stole the show 🙂 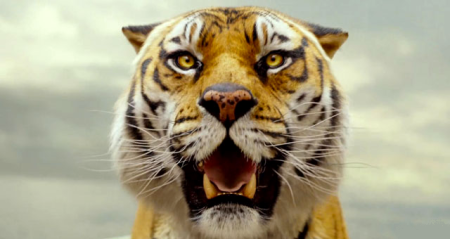 I lost count of the number of times i went “oooh!” and “so beautiful” and “awwww” and “wow” over Richard Parker and his antics. The look in his eyes as he hung on to the lifeboat, body immersed in the sea…I wanted to hug him, say it’s alright, you’ll be saved, and squish him! 😀 Gosh, he is so so so beautiful, I can’t stop gushing over him 🙂

Since the day I heard this movie would release by the end of 2012, I’d been waiting, patiently but eagerly. Being a non-movie person, quite a few people were surprised to see HOW much I looked forward to this one’s release 🙂 I normally do not read movie reviews, especially of the ones I intend to watch. I’m particular about having my own views, ones that will no way be coloured or tainted by another person’s views.

Just yesterday, a team of people from work went to watch it, and returned saying they were slightly disappointed; that it was a good watch, but did not meet expectations. I was warned to go without expecting too much. I refused, and the nearer I got to the theatre, my excitement began bubbling within. I sooo wanted and hoped to love it.

I LOVED it. Absolutely loved it. Like, really gobsmacked 😀 I was more than satisfied 🙂 I loved it all. Pondicherry, Munnar, the mighty Pacific Ocean, the meercats. Pi – the liltle boy, Pi – the big boy, Pi – the man. The mother, father, brother, writer. The 3D, the blue whale, the sparkling sea, the visual extravaganza. Most of all, Richard Parker 😀

It was brilliant. It is never possible to make a movie out of a book, doing complete justice to it. And when the book in question is one like Life of Pi, it is all the more difficult. To even endeavor to make a movie out of such a brilliant book itself is an act that deserves much appreciation. To do the kind of justice this one did to the book deserves a bow 🙂 I thought it was awesome! I just wish I went to a better theatre, one with better 3D effects.

It was so goooood, I did not even WANT popcorn! 😀 Now that should say it all!

Richard Parker, you are awesome! 🙂 I dedicate this post to you!