One of the good things that happened with my move to Kuwait was the introduction of several big brand names into my life: names I had only hitherto read in books or seen/heard on TV. And, we’re talking about brands such as Pottery Barn, Harvey Nichols, The Cheesecake Factory, Debenhams, Nyx, Footlocker, American Eagle Outfitters, The Body Shop, Charlotte Tillbury, Victoria’s Secret, P.F. Chang’s, &OtherStories, William Sonoma, Boots, Solaris, Kidzania, Starbucks, Bath&BodyWorks, Jack Wills, Texas Roadhouse, Milano and West Elm…to name just a few. While I knew that I was entitled to an employee discount at all of the brands we operate – over 90 of them – what I didn’t know was that, even with a 30% employee discount, I wouldn’t be able to afford half of the stuff from most of these brands 😛

Yet, I went about exploring what each one had to offer. Except for some of the Food brands, I found none that called out to me. Well, except PotteryBarn, but I’m not paid enough for that 😛 Still, it was fun to recall some of the names I’ve read in the Shopaholic series of books and marvel at how I didn’t have to be in Paris or New York to be able to pop into some of these stores, touch and feel them, look at the price tags, let out a deep sigh and walk away, thanking my stars that I did not have a credit card and wasn’t a shopaholic like Becky Bloomwood.

A couple of weeks after I joined and settled in, my kind manager took me on a tour of the The Avenues, the one-stop shop for all our brands…and more. And, the one that absolutely caught my fancy? TEAVANA. I’d never heard of it before (yes, I hadn’t!) and I was stunned at the rows and rows of different flavours of tea that filled up this most beautiful store! My my, how could there even be that many teas!? The sales girl won me over by allowing me to taste several of their teas, after each of which I excitedly exclaimed “How lovely! I like this one better than the last!” Trust me, I had no clue which was which and if she was giving me the same tea over and over again 😛

I don’t think my manager had ever seen me that excited before and told me we had more stores to cover. I gave no heed and was going about enjoying another ‘taster’ cup of yet another lovely tea, when he actually told the sales girl to stop taking me on a tea-high and wheeled me about. And, that’s when my eyes fell on the B.E.A.U.T.I.F.U.L. Japanese tea sets: in cast iron and porcelain. I gave out a squeal and he nearly spilled his tea in fright. He laughed at me saying “My life! I should never have brought you here!”

It was love at first sight. And it was a relationship that would never work out. because they were ridiculously expensive. Yet, from then on, every time I went to The Avenues, I would pass by the Teavana store, longing for a cast iron tea set and wishing it up on me.

It took 22 months for the universe to conspire in my favour. Ok who am I kidding!? The universe had nothing to do with it (because it’s just some bullshit Paulo Coelho came up with to make money off his book!) and that’s not how the Universe functions. Bah!

Two things worked in my favour:

So, there was to be a celebration and the colleagues were to get me a gift. The top boss killed all ideas of vouchers and gift cards and said “get her something that she’d love to keep forever”.

They planned it through a whole week. One person booked a meeting with me to discuss “Communications Next Steps” for one of the projects and suggested we meet in the cafeteria instead of at our desks. As we walked into the cafeteria, I saw a group of people who are all my friends but never really group together…and they were awkwardly silent, looking to the other side, standing around a table. And I casually remarked to my meeting partner “That’s a strange bunch over there. Are they having a silent prayer or something?” So, when I realised they were all waiting for me, it was a pleasant surprise!

My erstwhile manager then congratulated me and spoke about how happy I looked and how Hobbes and I are great together, and so on. And in the middle of his talk, one of them who was leaning on the table moved aside and I glimpsed a ribbon-wrapped box, with a name that made me squeal that same squeal from 22 months ago, much to his amusement.

Again, unabashed, I started hopping and jumping in such child-like excitement that he wrapped his speech and told me to open the box.

And that’s how this Limited Edition Teavana Gold Imperial Dragon Cast Iron Tea Set found its way unto me! 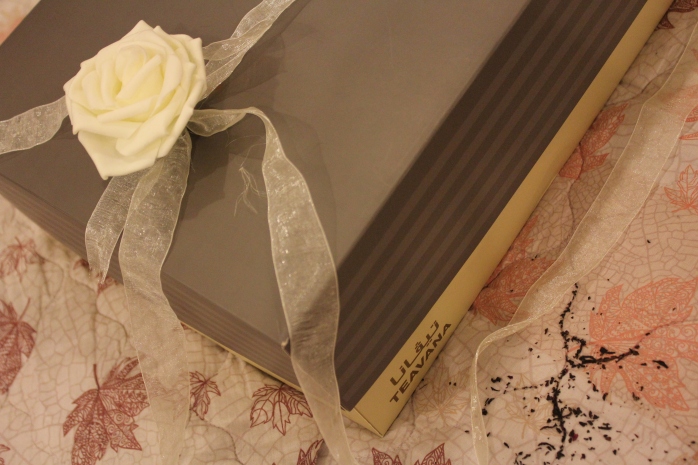 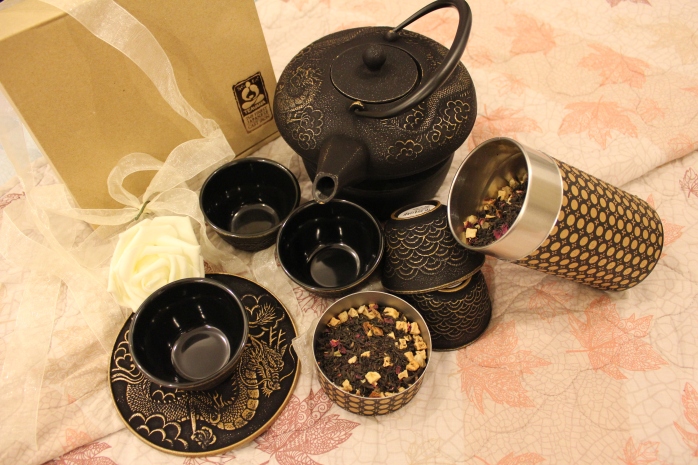 When I reached home, I unwrapped it again, took pics and wrapped it all back up! About time I get back to my senses and actually have some tea from my precious tea-pot!

Teavana, acquired by Starbucks, is in the process of being shutdown the world over and they no longer produce these. So, Teavana tea-ware have now become truly collector’s items! Added joy to self 😉